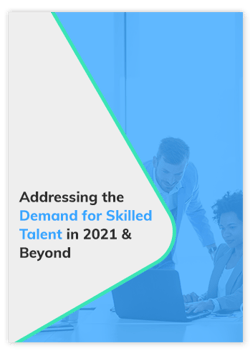 [White Paper]
Addressing the Demand for Skilled Talent in 2021 & Beyond 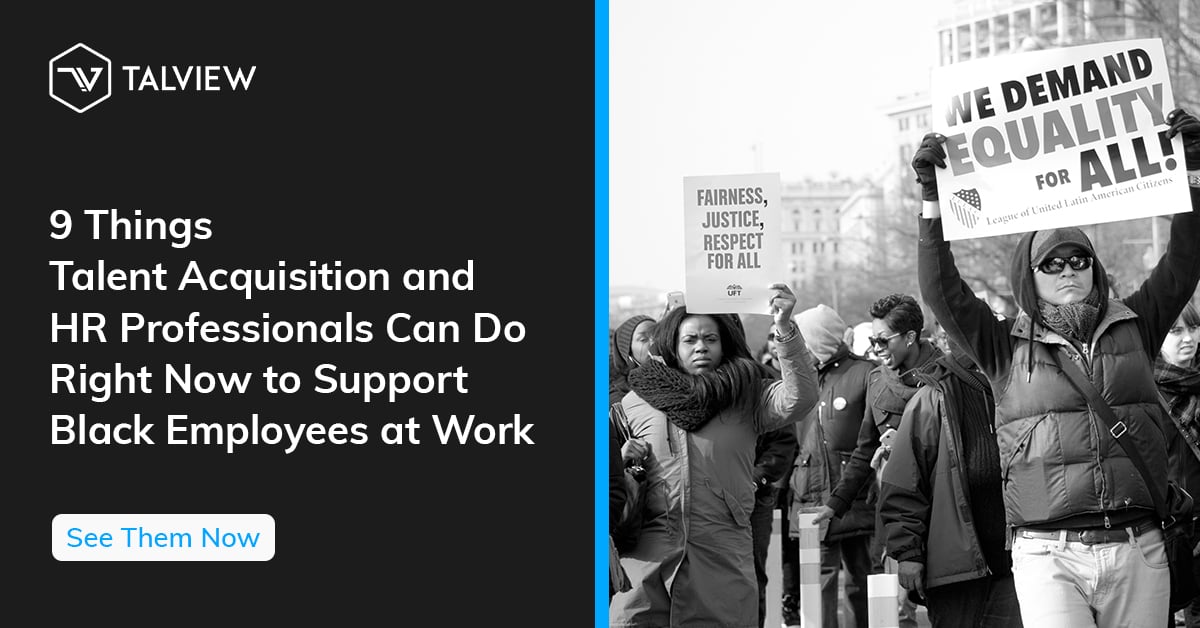 The recent murders of George Floyd, Breonna Taylor, and Amaud Arbery have sparked massive outrage in not just all 50 U.S. states, but in cities around the world. As protestors fight for equal rights - to walk home with a bag of skittles, go for a jog, sleep in their own beds, and live daily life without constant fear -  many of us in talent acquisition and human resources wonder how we can help support our Black friends and colleagues at work both during this difficult, tragic time but also in the future.

The truth is, there are several steps we can all take right now to support our Black colleagues in life and work. Some of them are easier than others. But all are necessary. Please note, this post was NOT designed to be a business case for diversity and inclusion. It IS designed to be a call to action. With that said, we hope you’ll read this, share it, and act on it starting today.

I’ll repeat: this shouldn’t and is not going to be about how diverse teams perform better. You shouldn’t need a business case to support doing the right thing. We shouldn’t need studies like this or this or business cases like this to support diversity and inclusion at work. Still, the evidence toward increased performance by diverse teams is so alarming that Goldman Sachs won’t invest in companies who lack diversity in their board. Yet, only four, (yes, you read that correctly) Fortune 500 companies have a Black CEO. So, what can you do today to support the Black community and your organizations? Hire and promote Black employees into leadership and management roles. Additionally, when looking at your Board of Directors, don’t just pull from the pool of existing Black Board Members. Create space for NEW Black Board Members on your team.

For years now, feminists - women and men alike - have been advocating for equal pay. On average, we know that women make roughly 80 cents per every dollar men make. However, if you consider intersectionality (which you should), Black women make roughly 63 cents and Black men are paid 72 cents per dollar white men make. This income inequality, State of Work America finds, is the greatest cause of higher poverty rates.

Speaking of poverty, according to the Department of Labor, the federal minimum wage is $7.25. It’s been the same since 2009. What has changed, however, is the cost of living. The U.S. Inflation Calculator shows a cumulative rate of inflation since then is 19.5%. This has led to many companies paying employees a minimum wage but not a living wage.

According to The State of Working America, “Before the mid-1970s, economic growth in the United States was associated with falling poverty rates. If that relationship had held, poverty would have been eradicated in the 1980s. The decoupling of rising growth and falling poverty, however, means that Americans are working longer and harder but becoming poorer and less economically secure.” Further, “Workers earning poverty-level wages are disproportionately female, black, Hispanic, or between the ages of 18 and 25.”

Between stagnant wages, minimum wage not adjusting with inflation, and income inequality, the U.S. Census Bureau found that 38.1 million people in 2018 were poor. But, with the right organizational policies, it doesn’t need to be this way. Pay employees an equal and living wage.

If it wasn’t already obvious, people are pretty set in their own ways. And that means thinking highly of themselves, even when they don’t deserve it. With that said, it’s pretty sad to see research that diversity training doesn’t really work the way it’s supposed to. However, research conducted by researchers and professors at the Wharton School of Business found some interesting results. “Contrary to our expectations, the training didn’t prompt men to nominate more women [for mentorships], nor did it lead senior women to nominate more junior women. But we saw that among junior women in the U.S., those who took the bias training (as compared to those who did not) used this initiative to seek out mentorship from more senior colleagues at the company, regardless of gender. Apparently, the training prompted these women to be more proactive about their own advancement…. The second surprise emerged from the version of our training that focused entirely on gender bias and gender stereotyping. Despite its clear focus on gender, it also had positive effects on U.S. employees’ attitudes and behaviors toward racial minorities. Even though there was no mention of race or racial bias in this training, U.S. employees who took it were more willing than their counterparts in the control group to acknowledge their own racial biases, provide informal mentorship to racial minorities, and recognize the excellent work of their peers who were racial minorities.”

The UPenn team recommends the following actions to improve diversity training including: diversifying your training approach, keeping track of data, and experimenting with different programs and their results. Requiring training can not only help make people aware of their own biases, but help more junior employees become aware of biases they face and offer solutions to overcome them.

According to the American Psychological Association, 61 percent of adults in the U.S. report experiencing day-to-day discrimination. Yet, when employees report racism and sexism at work, racists and sexists and even employers are rarely held accountable. That includes in private workplaces and, more pertinently to the current events, in law enforcement. No matter what our workplace is, the best way to end racism (and sexism) is to hold employees - including high performers, including leaders - accountable for their actions. That could mean final warnings and terminations.

If we think that losing one leader or one high performer is hard, think about all the money we’re spending on recruiting to replace all the people who leave because of that person. Think about all the productivity that is lost because racists and sexists have created a toxic work environment. Think about the potential lawsuits that cost your organization money that could be prevented by simply throwing out that apple.

By ostracizing racists and sexists from our workplaces and society, we send a message that we do not accept that behavior and tell everyone else they are safe to come to work and be their best. We also create more productive workplaces and save money.

Talk To Company Leaders About Diversifying Your Team

Diversity has been an issue in American companies for a long time. While many worked to correct the discrepancies, the recent pandemic has certainly thrown diversity efforts out the window. In the last few months, unemployment has jumped from roughly 3% to more than 13%. Of that, Black women were twice as likely as white men to say that they were laid off or furloughed in the wake of the pandemic. Coupled with already low pay and less opportunities for advancement, job losses among the Black community are severely damaging.

With that said, one thing that we can all do whether we’re in talent acquisition or HR or not, make an impact by simply voicing our opinion. Tell hiring managers and company leaders that you have noticed a lack of diversity and it would mean a lot to you - and your prospects and customers - if the company made an effort to close the gaps and increase representation in your teams and leadership. It may not seem like a lot. But, letting your team know that diversity is top of mind for you can keep it top of mind for them, as well.

Earlier this week, Microsoft had a Town Hall for their employees to talk about how racism has impacted them at work. Employees joined a Microsoft Teams call designed to help them share stories about how racism has impacted them and listen to others. There were lots of tears, and rightfully so. The great thing about the call was each person attended to listen and support their coworkers. Even more, they spoke about strategies to call out racism while it’s going on in the moment. We need to actively create more opportunities for conversations, listening, problem solving, and healing.

Give Black Employees Time Off to Grieve

One of the positive things about the Microsoft call was it seemed very cathartic for employees. It helped them grieve. According to Washington University, grief can cause difficulty concentrating, loneliness, withdrawal from others, sleep disturbances, anger, and more. The process of grieving “allows us to ‘free-up’ energy that is bound to the lost person, object, or experience—so that we might re-invest that energy elsewhere. Until we grieve effectively we are likely to find reinvesting difficult; a part of us remains tied to the past.” So give your Black employees - and anyone else who may be struggling right now - time off to heal. They will appreciate it.

Give Employees Time Off to Protest and Vote

A recent Quartz at Work article shows, “70% of millennial workers agreed that ‘employees can make an even greater impact on our world than the leaders who run organizations.’” Some employers have capitalized on this and have created policies to attract, engage, and retain employees who consider themselves social activists. Some highlights include new benefits like time off to vote. Even more, some employers are giving employees extra paid time off to protest, whether they are passionate about climate change or Black Lives Matter. Some employers, like Patagonia, have even gone so far to pay employees’ bail if they are arrested during a protest. How cool is that?

Right now, we’re all struggling. But our Black friends, neighbors, colleagues, and fellow humans are struggling the most. And, they have been struggling for years. On the Microsoft town hall, the Vice President of US Channel Sales, Lani Phillips said, “It’s not about always having the right thing to say. It’s about making people feel heard and like they matter.” It’s about time we all come together to make others feel like they matter. As we look at our own organization here at Talview and we reflect on the past, live in the present, and think about the future of the company, we are actively working on ways to improve our own organization and hope you take these 9 steps into your own organization, as well. Please join us in speaking up and taking action today.

In our earlier blog titled The New Normal of Campus Recruitment, we provided an ...

END_OF_DOCUMENT_TOKEN_TO_BE_REPLACED

Everything You Need to Know About Assessments And Were Afraid to Ask - Part 1 of...

Over the next three weeks, I will break down everything you need to know about a...

END_OF_DOCUMENT_TOKEN_TO_BE_REPLACED

The New Normal of Campus Recruitment

Virtual recruiting technology isn’t new, but it has been taking an increasingly ...