A Definitive Guide to the Gig Economy

The advent of technology has brought upon a major transformation in the way we work. The word “job” does not refer to a permanent position anymore as both employers and freelancers are looking for a no-strings-attached arrangement for procuring what they want.

The introduction of the gig economy has brought upon a massive change in the stake that freelancers hold in the market. A recent report by EY (formerly known as Ernst & Young), published in collaboration with Nasscom and FICCI, titled “Future Of Jobs In India: A 2022 Perspective”, reveals that Indian freelancers hold a 24% share of the global online gig economy. The report also says India is the third largest online labor market.

As far as the American market is concerned, freelancers are already beginning to make a dent in the market. According to the 2017 Freelancing in America study, an estimated 57.3 million Americans (that’s 36% of the entire workforce) participated in some kind of side-hustle, freelancing or gig work in 2017.

So, what does this mean for recruiters?

The gig economy can be a bigger deal for recruiters as they must now devise ways to keep up with the pace of the industry as well as identify the right talent. Advancements in technology have now given people the freedom to make money in unconventional ways. A large chunk of responsibility for the shift to the gig economy is the ascension of millennials into the workforce. A whopping 92% of the millennials prefer to work remotely. The rise of alternative employment options can imply that organizations and recruiters may need to rethink their hiring process. Recruiters could soon have a difficult time finding quality candidates as more shift into the gig economy.

What is the reason behind the sudden popularity of gig jobs?

Freelance and part-time jobs have not been uncommon in many industries. Most professionals in the art field like photographers, artists, designers, writers have been hired for temporary gigs and projects. However, the most surprising statistic is that more and more professionals are not moving to gig economies for economical reasons, but merely for the lifestyle it offers.

However, there are a few  major reasons that led workers to the gig economy in the United States:

What are the benefits, according to the gig worker?

A recent survey by the Pew Research Center shows the factors that draw professionals to the gig economy. A huge majority, 68% of those surveyed, said gig work was great for people that want flexible work schedules. Meanwhile, 54% said freelancing is good for older people that do not want to work full time. 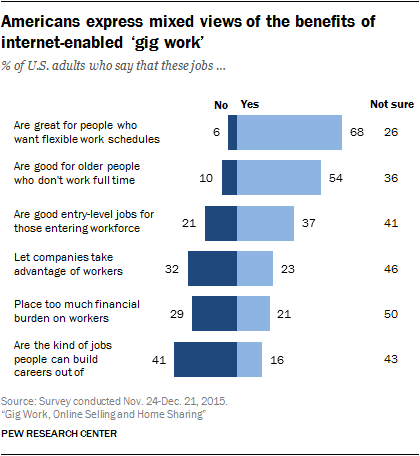 Despite the popular myth that freelance work is all for millennials, the Pew survey found that only 37% of people think gig work is good for entry-level jobs and 21% said it is not good for entry-level workers.Depending on the income slab a family falls under, work can be allocated in different ways. For example, low-income households are more likely to rely on gig work requiring manual labor, while wealthier families tend to be renting out their homes or selling handmade goods for extra income. The Roosevelt Institute put out a study recently that predicted that online freelance work will dilute hierarchy and de-centralize power in organizations in the future.In other words, the impact of technology has increased the efficiency and quality of remote work and has given smaller businesses the potent of competing with larger organizations. By 2040, the report says, workers will increasingly rely on a portfolio of short-term assignments rather than one job. This shift could boost overall productivity and the earnings for individuals, but those without entrepreneurial skills could get left behind.

As specified earlier, recruiters are being driven to innovate new strategies to find quality talent in the increasingly competitive industry. Though a majority of the gig workforce is characterized by workers between the ages of 18 and 34, statistics also show that 1 out of 3 Americans applying for gig roles are over the age of 50. This shows that the gig workforce goes beyond just freshers looking for some money.

Here are the top 5 tips you can leverage while hiring in the gig economy:

How Gig Economy can help freelancers:

The booming popularity of the gig economy is not without reason. Gig economy offers tons of benefits to both the employer and the freelancer. 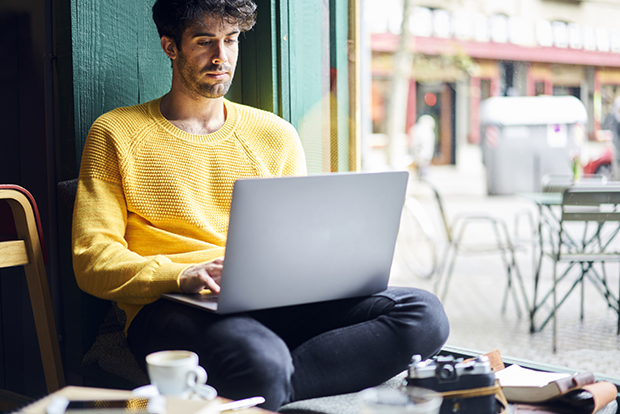 Here are a few reasons why you should embrace and be a part of the gig culture:

Love it or hate it, The Gig Economy is going to take the hiring industry by storm. Recruiters, especially, need to brace themselves with strong strategies that will help them stay afloat in the era of digital nomads.

If you would like to know more about how talent acquisition works in the era of the gig economy, make sure to attend our upcoming webinar on the 20th of December. Watch experts demystify the best practices you can utilize to excel at hiring in the gig economy.

Unavailable for the webinar? Worry not! Just leave us your details here and we’ll be sure to send a recording to you!